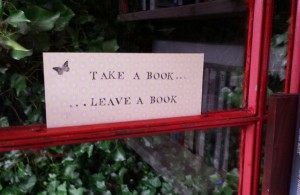 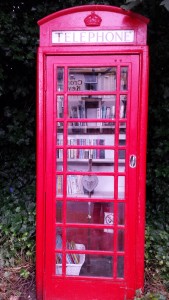 So what do you do with a redundant phone box in your village? Turn it into a book swap of course!

After an investigation worthy of Sherlock Holmes himself, to find out who on earth owned it, I set to work rallying my troops to convert our phone box into a book swap for all ages. When I say troops, I use the term loosely. I refer to Trev (a familiar face at the cricket club) who put up the shelves, Lorraine (one of my besties) who helped me to wrestle the enormous spiders out, out, OUT, and a bloke from the pub across the road, who offered to shift a bit of ivy for us so we could actually open the door! Many book donations later, we opened for business! As far as phone box book swaps go, I would say it’s been a great success. It is used and enjoyed by many, and adds to the quirky character of our village.

Never being one to miss an opportunity for promoting children’s literacy (in the leaves) I decided to run a children’s poetry competition for ages 7-11, based on the theme of, Ockbrook in autumn. The poems were judged by a local primary school teacher, and I promised to put the winner on my blog, so here it is; a gorgeous poem by Charlotte Davison: 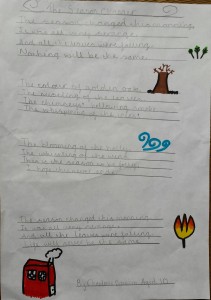 An unexpected entry from little Alfred aged 5 arrived, typed and with a comment from his mum saying, ‘I am aware that he’s a bit too young, but he really wanted to enter anyway, and we’ve always told him you mustn’t let being little stop you.’ Here’s Alfred’s (a runner up):

I collect them all

I see the leaves blowing

And time for trick or treating